Psilocybe ovoideocystidiata is a psilocybin mushroom in the section Stuntzae, having psilocybin and/or psilocin as main active compounds.

From the abundant ovoid pleurocystidia and cheilocystidia. 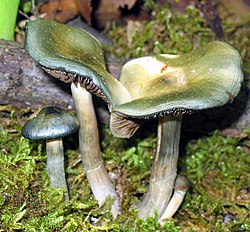 Psilocybe ovoideocystidiata is mainly native to the eastern United States, in a range that stretches from Kentucky to Rhode Island, but has been found as far south as Georgia.

It is common in the Ohio river valley, here it is often found in the woody debris of overflow areas, along rivers and streams.

More generally, it is often found in man-made mulch and wood chips.

More recently, it has turned up in the western United States, in the Pacific States from Western Washingtonto Southern California, though it is still a relatively uncommon species in this region.

It has also been reported from Europe, specifically in Switzerland and southern Germany.

Seasonality varies a great deal depending on what region they are found in, but in the northeastern US, they are most common from April to mid June but they occasionally fruit as late as November. - From Wikipedia, the free encyclopedia

These were collected by an avid enthusiast in Pretoria, South Africa growing from a man made wood garden mulch bed. It is one of the easier wood loving species.

Psilocybin and psilocin containing mushrooms are illegal in South Africa.